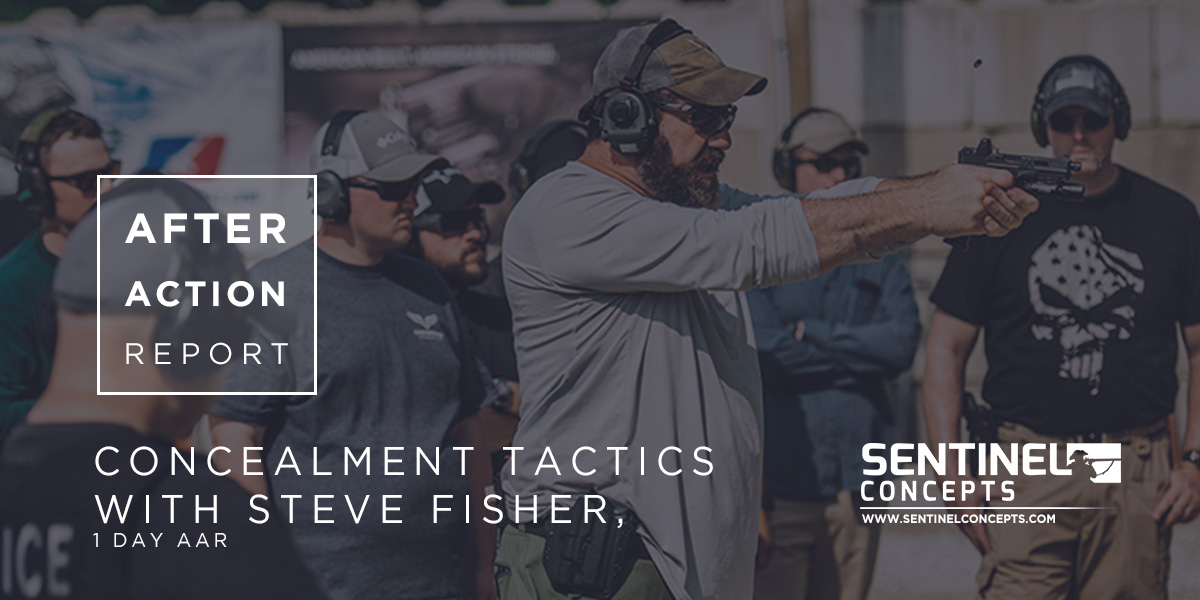 First things first just for some background on me . This isn’t my first class or even my first class with Steve (this would be number 3) I’ve taken numerous courses ranging from CQB Pistol and Concealed Carry classes right through various shoot house classes, I’m an admitted training junkie. Now having said that Steve Fisher is one of those instructors that I just keep going back to because there is always more to learn and for the money his classes are very hard to beat.

As stated this is a 1 day course that ran from 9am till about 5pm. That means cramming a lot of material into a small package.

The day opened with the normal safety brief and an introduction of Steve and the students. A nice change of pace between Steve and other instructors I’ve trained with can first be picked out here. He wants to know what you’re carrying and how. He then tailors the class to the students. The vast majority in this class were strong side carry with a sole appendix driver and everyone if memory serves was rocking a striker gun. So Steve put on a strong side and an appendix rig and wore two glocks (hey the guy isn’t called the Yeti for nothing he can manage) and demonstrated every drill and technique with both options.

After the safety brief we moved on to a discussion of gear choices and placement. Steve wasn’t pushing a brand (though when asked specifically he’d offer a suggestion) just discussing the merits of different designs and why there isn’t a one size fits all option. He then encouraged us to change clothes repeatedly during the class so we could try various modes of dress during the class.

Next we moved to the range. Again Steve demonstrated each draw technique from both appendix and strong side and he did them from each mode of dress. We then worked those dry for a while and then hot for some reps.

Which brings me to the main reason (other than him just being a good dude to spend the day shooting with) I train with him and others would as well. Steve is a master at diagnostics, prior to this class Steve had seen me in the shoot house and with a carbine. He hadn’t really observed me work a pistol before and within the first 10 shots he gave me 2 corrections to try with my presentation and for lack of a better way to describe it stance (though only my head and arms). Now remember when I said I’m a training junkie? I’ve probably had 20+ instructors see me shoot a pistol (in their defense a few of those were in the shoot house where observation isn’t particularly available for diagnostics) and Steve was the only one to offer the two changes he thought I should make… and it was a light bulb moment! Suddenly my dot was right where I wanted it and I was shooting flatter and faster. It took him 10rds to see what no one else had and to make me a better shooter. Now I just have to unlearn a few hundered thousand draw strokes and ingrain what he showed me. That is what sets Steve apart from the hundreds of others out there he can and will make you better if you’re willing to listen.

We worked drills for the whole day, dry and live and ran a few interesting tests on how activities effected our performance. One other thing I’d never experienced before was that as we were standing there Steve paused in his speech and asked us to note how we were standing. We all did and he informed us that those were our ready positions and he wanted us to change them up throughout the day. Sometimes we had our hands in our pockets, arms crossed, thumbs hooked in our belts, pretty much anything because that’s how life is. None of us walk around in a fighting stance and training in one is ridiculous. I won’t get into the drills because if you want to see them you can take the class, they weren’t complex but they were necessary and worthwhile.

Throughout the day Steve continually was Steve cracking jokes and telling relevant stories all the while fixing what he saw (even though nonr of us could see it) making us better. He also pointed out gear issues. I know two guys a buying new holsters (no he didn’t tell them a brand or push anything) because they realized short falls in theirs. I’m getting a new belt because Steve observed that mine when I bent over or sat was so stiff that it wouldn’t adjust to the contour of my body and instead would allow my gear and pants to move around. I’ll also be adding something to the back of my holster to keep my shirt tucked in.

To put a close on the day we went back to the classroom and did an AAR and a Q & A session. Everyone came away with something and was happy. In the Q&A Steve again showed what type of man he is when I asked the hard question “what instructors do you think I should seek out?”. Many people would simply hand you a course catalog for their company but Steve isn’t many people he thoughtfully gave us a list of people he trusts and that he’s learned from or who’s curriculum he supports. I already had a list but it grew by a couple names because when people I respect give advise I tend to listen and Steve is someone I respect. He closed by inviting us to ask him any other question we had going forward and giving us a way to do that once he was no longer in front of us. That’s something a select few instructors do and it is appreciated.

If I have to come up with a con for this class it’s that it’s too short. 1 day classes are probably easier to fill but man I wish I had another day or even 2 because I think there would be value added. I gladly told Steve that if he offered a multi day class up here I’d be in, and many of the students echoed my sentiment. In short if you see that Steve Fisher is teaching in your area go to the class. If he’s not in your area then take a drive because it’s worthwhile. I know I’ll be back next year for whatever he offers.