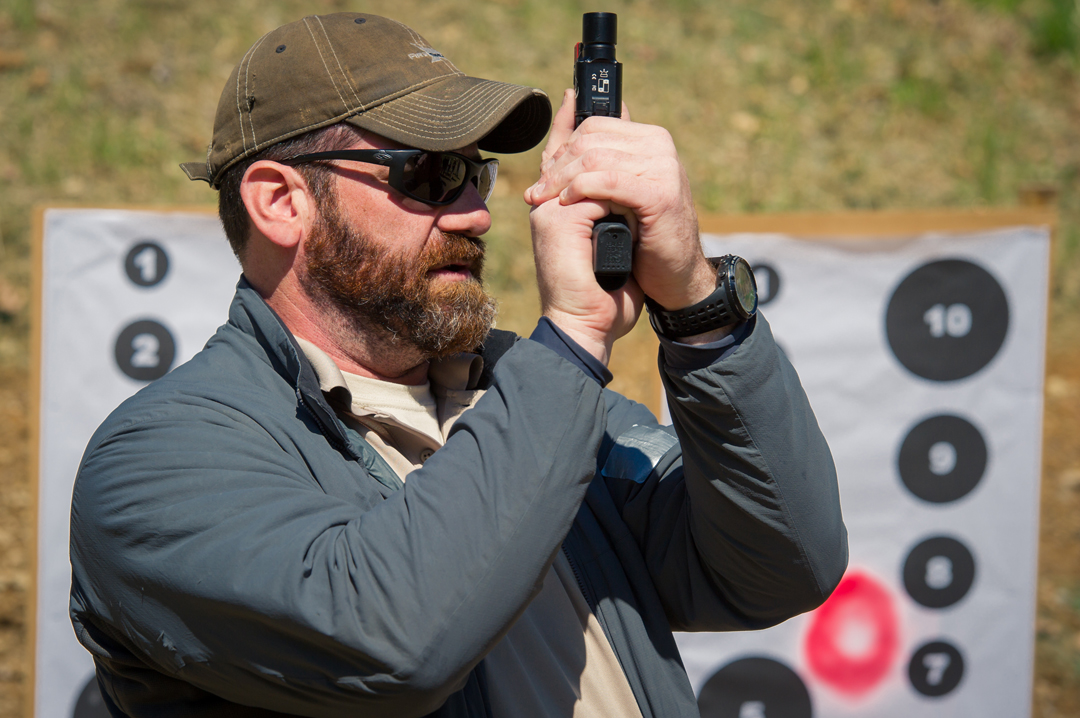 As Originally Published in Breach Bang Clear
May 20, 2014, 11:45 am
Article by Mad Duo Nate, Photo by Natalie Cake 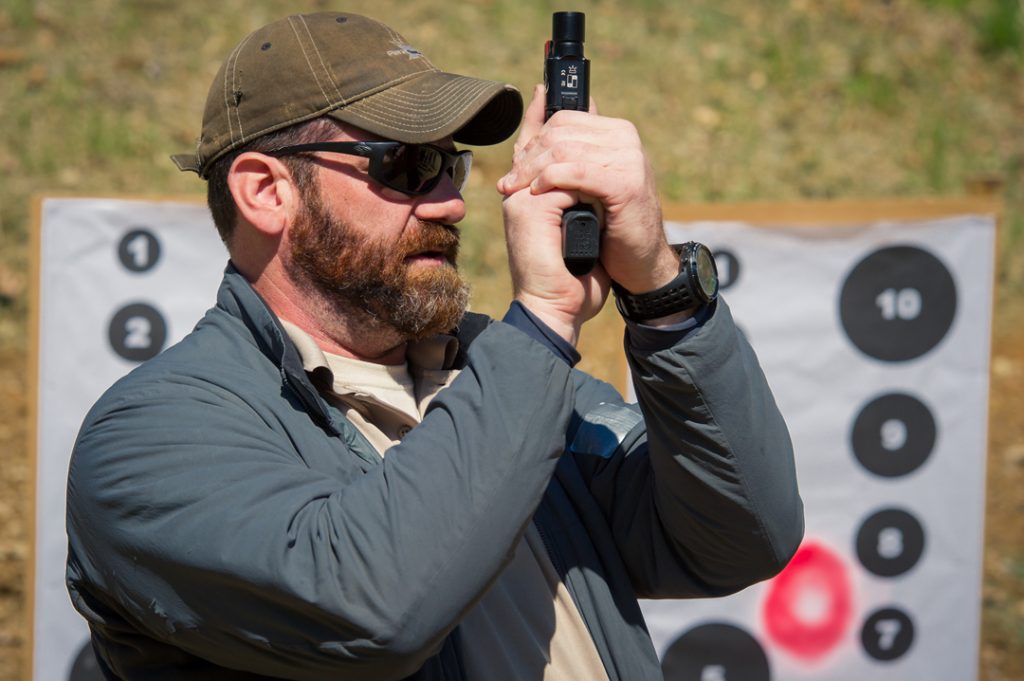 By the time I finished the first drill of the day I knew that I was in trouble.

Day one of Sentinel Concepts “Critical Handgun Employment” began with Steve “YETI” Fisher lining the class up at the 25 yd line. Shooting for a 6” bull’s-eye, we fired 10 rounds slow fire with all the time in the world. Walking down range, I was surprised to discover only a few near misses, and absolutely zero hits in the black.  I felt my heart sink, and that little voice in the back of my head say “WTF dude?”

Before shooting this first drill, the class had gathered around Steve for the obligatory meet and greet as well as the necessary safety and medical briefs. The students were a diverse mix of shooters, from long time competitors to fairly novice new gun owners. Their selection of guns and gear were equally diverse, with the usual assortment of Glocks and M&Ps along with some Berettas and smaller carry guns.  The crisp spring air of West Virginia still lingered as we started the day, with most students wearing jackets until the sun warmed the air and many doffed their layers.  We reviewed different forms of carriage, and proper set up of our rigs before stepping out onto the firing line.

The class was being hosted by the Tango Down range a short distance west of Martinsburg WV. This was not the first time I had shot at this range, but soon proved to be one of the more challenging courses I’ve taken.  With the cost and availability of ammunition still spotty, I decided to go cheap and shoot 9mm over my usual preference of .45 acp. The problem with this is I didn’t have a suitable 9mm to shoot for the course, so I borrowed my mom’s bone-stock Glock 19.

Having shot somewhere around 30,000 rounds out of various Glocks over the last 10 years, I wasn’t worried about how I was going to shoot.  Eyeballing my initial results from the 10 round, 25 yd string of fire- that rapidly changed. 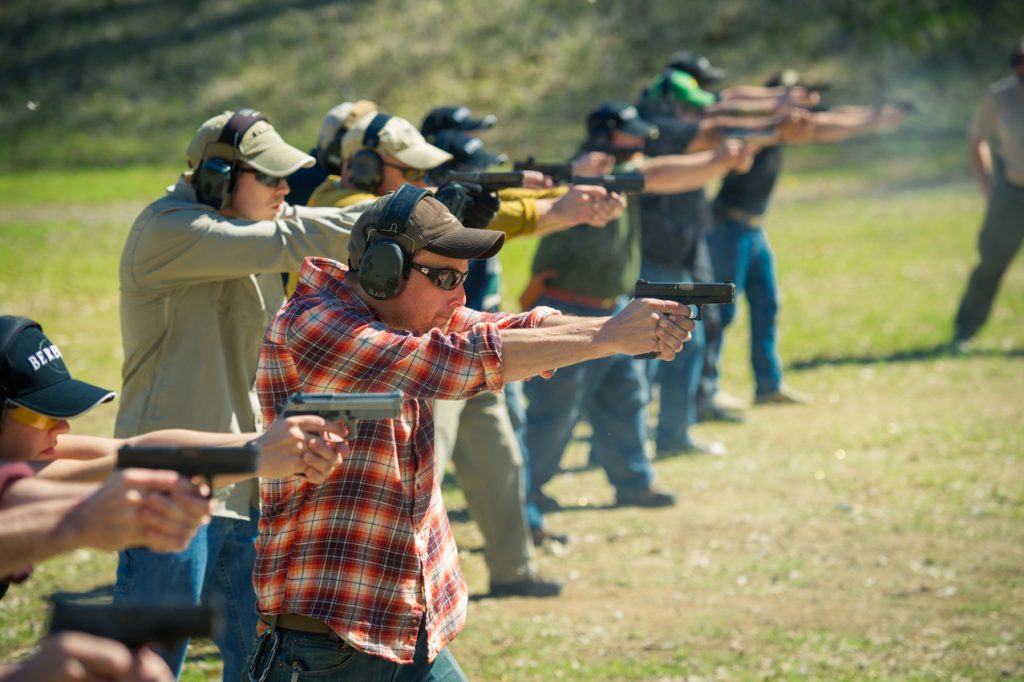 Steve has a very wide knowledge base of shooting. He’s trained under many of the best instructors in the country and has extensive former experience in law enforcement. He told us that he has probably spent as much money on shooting schools as some people do on college, and from watching the giant shoot I believe it. Having never seen him shoot (other than in some online video clips and some footage of when he was instructing with Magpul Dynamics) I was quickly awed by his speed and accuracy.
He began the demo rocking a Nighthawk custom 9mm 1911 with an RMR. However,  he undoubtedly sensed that some people were thinking, “Well, that’s easy to do with THAT gun!”  So, he proceeded to shoot several drills with random student guns, with exactly the same result.  Like my grandfather use to say to me, “maybe it’s the Indian and not the arrow.” 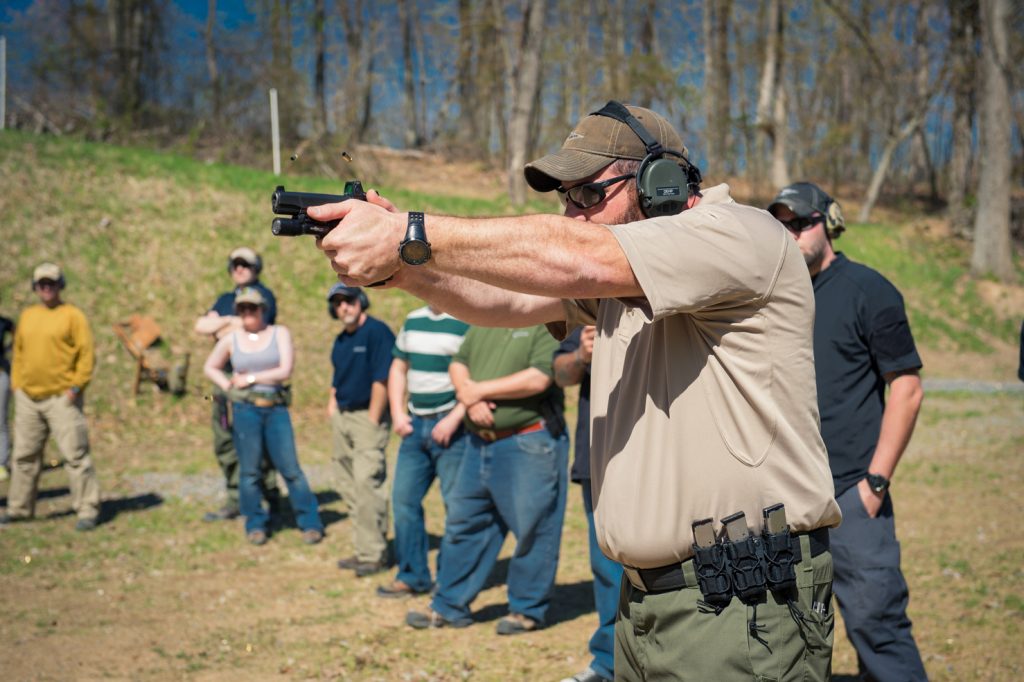 As the day progressed I found this statement to be definitely true for me. Having already managed to judge myself harshly for my inaccuracy, I continued to shoot the mornings drills with varying degrees of success.  One of Steve’s key principles is to allow the class to progress naturally. If some students are having issue with a certain drill or task, he will not plow forward just to keep the timeline of the curriculum. This is appreciated by anyone struggling to grasp a concept or gain a solid hold of a technique.  We spent the bulk of the morning working on the “science” of the fundamentals, namely trigger control and the sights. Completing different dot drills at various ranges 25 yds and under, I was honestly relieved when we stopped for lunch. I’m not a master-blaster pistolero, which is one of the reasons why I shoot handgun more often than rifle these days. Still, my unusually bad performance with the stock Glock was troubling me, and frankly I was just simply psyching myself out.  After lunch we shot Steve’s “standard” again, and my performance increased slightly. I’d had the chance to collect my thoughts and focus on what I had been doing wrong. 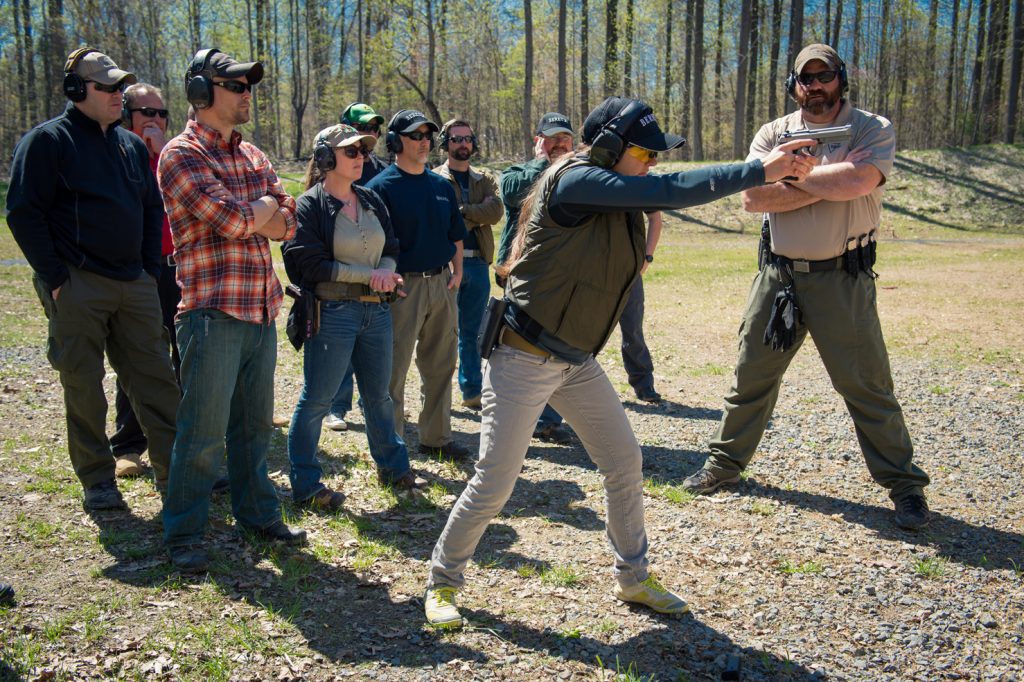 The class progressed through the rest of the day, and you could see people’s speed and accuracy increase with each drill.
“Every miss isn’t just a liability, its time you are giving the bad guy to continue to do his work.” Steve Fisher explained. “You can have the latest Uber-blaster 6000, but it’s only as good as the shooter. Front sight focus and triggers. These are the things to concentrate on.”
For as big and scary of a looking dude as he is, Steve finds ways to explain things easily, often with a humorous touch. His personality really shines through while instructing, and this style is one of the key things that sets him apart from many of his peers.  By late afternoon, the tempo had increased with everyone’s skill levels. We ended the day by firing the “standard”, and at the 25yd line I noticed a huge improvement over the first magazine of the day. 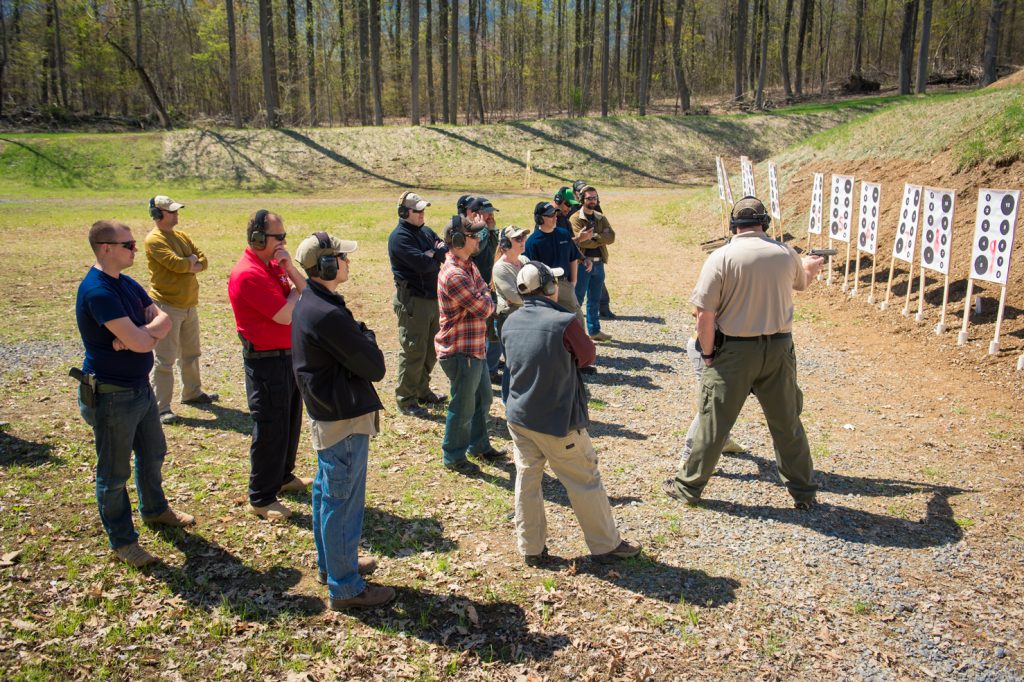 The next morning we started day two of the course in the same fashion as we’d ended, by shooting the standard at 25, 15, 10 and five yards.
Having noticed that my rear sight was drifted off zero, I started the day shooting a loner Glock from Steve. The results were significantly better than any of the drills from the day before. Aside from “knocking the rust off,” I had my confidence back, and it showed on the targets down range. We went over different types of reloads and malfunction clearing, learning some simple techniques that I had never seen before. We then progressed to shooting on the move, which was also an eye opener. Previously, I had been instructed to fire on the bottom of a step, upon settling. This technically is moving, pausing, firing and then moving again.
“How do you shoot on the move? The best way to shoot on the move is to shoot WHEN THE SIGHTS ARE RIGHT!” oddly enough, this sage advice worked! There were many subtle yet profound points I took away from Steve’s course, and this was one of them. We finished the day firing the Standard a final time. I had switched to my preferred carry gun, my 1911. This by far was the best run I had, and it felt good to finish on such a high note.  Sentinel Concepts Critical Handgun Employment has been one of the best, most enlightening courses that I have ever attended. It’s not full of fancy bullshit ninja moves; it’s a realistic and challenging course that requires you to THINK as you shoot. I cannot recommend it highly enough. As Steve said at the end, “Don’t turn shooting into a chore or a task. Have fun with it!” if you psyche yourself out as I did on day one, or approach training with too serious of an attitude, it’s going to affect your performance. Check out Sentinel Concepts training schedule here or on Facebook here. 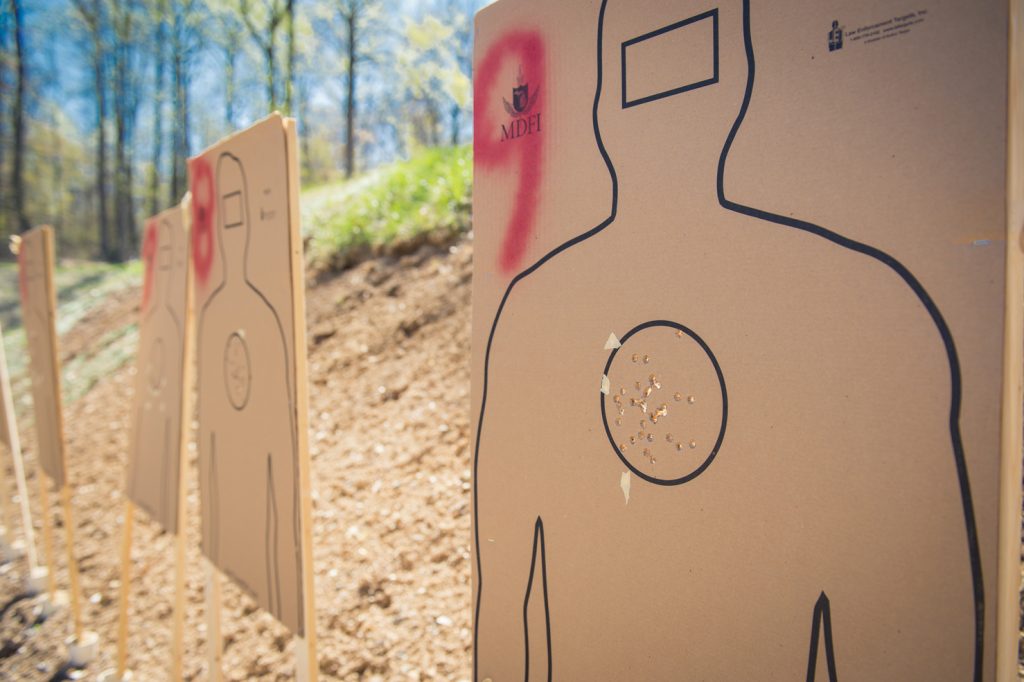