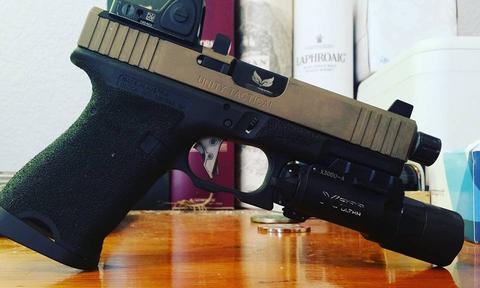 After an introduction and learning a little about Steve and his background we went into the safety brief which included what to do in case of a GSW or other injury. Steve also went over how we were under “big boy rules” and violating critical safety rules will get you escorted out of the class. Basically don’t be an idiot and we won’t have a problem.

After that we went right into shooting which started out at the 25 yard line. Cold. No warm up no practice, just 25 yards and let me see what you got. The targets are the usual silhouette with a 4”x7” high center chest box and a 3.5” circle in the head. Lines don’t count!

After our humiliation (well at least for me) at 25 yards we went into going over aspects of shooting at various distances. The round count was low for the first part of the day. LOTS of instruction on the range. Steve was very good at not only explaining WHAT to do but also WHY to do it. Giving real world applications and explanations. After every drill while we were stuffing mags and hydrating, Steve would have each of us take a few seconds to talk about what we learned from the drill and what improvements we saw and also to identify what needs more work. It was basically a mini debrief after every evolution which really made the material stick.

Ready Positions. Steve went over some popular “ready positions” including low ready, high ready, high compressed ready, SUL and even briefly touched on the infamous temple index. He demoed each and gave some insight as to which would be best in a given situation. We discussed advantages and disadvantages to each and ran a series of drills at 7 yards using a different ready position every time. Throughout the rest of the class we’d switch up the ready positions that we covered to get repetitions with each. Steve explained how there’s not a one size fits all ready position. Situations dictate where the safest direction to point the muzzle is so it’s good to have options. Certain positions are more advantageous and are easier/ faster to present from. We got to experience this first hand throughout the day.

One student interaction that stood out to me was when one individual was having trouble with trigger control. To demonstrate the importance of a steady trigger press he stood facing the student (back to the target) while having the student hold the gun and look through the sights. Steve placed his finger on the trigger and told the student to keep the sights on target and let him know when the sights were aligned. Steve proceeded to empty a magazine into a 2” circle from 5 yards. This wasn’t done to show off but to demonstrate how a solid trigger press affects the gun. It really drove the point home.

Another drill we worked on was teaming up with the shooter next to you and taking their gun and magazine and “fidgeting” with it while their back was turned. We then handed the gun back and they were to fire a shot from 5 yards at a 2” circle. We were instructed to chamber a round at times and at others to leave the chamber empty while still inserting the mag. This was to help diagnose recoil anticipation and any trigger press issues. Since the shooter never knew if the gun was going to fire or not, this was a useful drill.

For the rest of the day we ran these and other drills at various yards and got a few “practice runs” of the 50 round qualifying drill that we would run at the end of day two.

Day 2:
Most of the day was spent building on what we had practiced and learned the day before. Again we started off cold at 25 yards running through a practice run of the 50 round qualifier. If you’ve never shot the drill it’s a very good gauge of your overall abilities as a shooter. It incorporates strict accuracy standards at distance and speed up close. There are time limits (which are very attainable) but accuracy is the main focus. You’re shooting at distances from 25 yards all the way down to 3. After shooting this drill I’ve decided to make it my warm up for all future practice sessions. It’s only 50 rounds and provides good feedback overall. I like it.

After the practice qual we went over how to feed the gun when needed. Tac reloads, speed reloads and reloads from slide lock. Steve went over the way he does it, WHY he does it and also provided real world application and most importantly the CONTEXT in which each is used. This is what really separates a teacher from an instructor. Anybody can demonstrate how to do each of these tasks. It doesn’t take anything special. But giving the proper context is what makes the difference and it’s where pertinent life experiences come into play. Steve was good at explaining why you might happen to perform that particular task as well as the best way to go about it.

We went over shooting stances and ways to mitigate recoil. One thing that helped me was rolling the shoulder blades into one another almost like I’m trying to pick something up with them. Keeping the elbows down and not locking them. Avoiding the “tactical turtle” thing with your head and slightly leaning forward.

Later we went on to malfunctions and how to clear them. Again he went over what he does and WHY he does it that way. He demoed each type of malfunction and how to clear it and then we got to practice it. We loaded up our mags mixing in 5 pieces of spent casings in random order mixed with live rounds to induce malfunctions. The goal was to try and get a lot of repetitions in on the different techniques. Several malfunctions were encountered so it was difficult to “game” it and know which type you’d get. You obviously knew one was coming but you didn’t know which it would be. This was done from the 7 yard line and accuracy was still to be maintained to the 4×7” high center chest box.

One area that that I was lacking in was recoil management. Steve had me slightly adjust my grip so that my support hand thumb is higher up onto the slide itself, not pushing into it but getting high up on it as opposed to resting it on the frame just below the slide. This is how Steve shoots and after a few drills in this position I noticed less movement with my dot and the gun seemed to recoil more back and forth as opposed to flipping up. Just a little tweak was all it took.

After lunch we came back and did some reverse failure drills and also shooting multiples. Steve went over how to transition from target to target. The multiples drills were shot with one target on the left and then another 7-8 targets down the line (only 2 shooters were on the line for each drill.) A big takeaway for me was when switching targets that are more than a few yards apart, it’s faster to look where you want to shoot and THEN point the gun at it. Again after each evolution we had a mini debrief and discussed our takeaways. I’m saying it twice because I believe it was a valuable aspect of the class. It helps.

The last drill of the day was the dreaded qualification to determine top shooter. This was done by going shooter to shooter with a shot timer. We were allowed to miss 10 shots and still pass the qual. It should be noted that this passing rate will probably change soon so this info may be stale. The rules were simple. Fire the specified number of shots in the allotted time and don’t miss more than 10. Fastest shooter with the least amount of misses wins.

The main thing that was different from this class was the accuracy standards. Everyone is a badass at 7 yards but push yourself to 25 (or further) and shooters tend to fall apart. The standards are attainable but it does take work. I was able to identify a lot of areas that need work and was able to learn some good drills to incorporate into my own practice routines. Steve is an excellent instructor and an even better teacher. He does an excellent job of explaining the theory behind things and breaks it down into a digestible form. Very pleased with the class. It was money (and time) well spent.