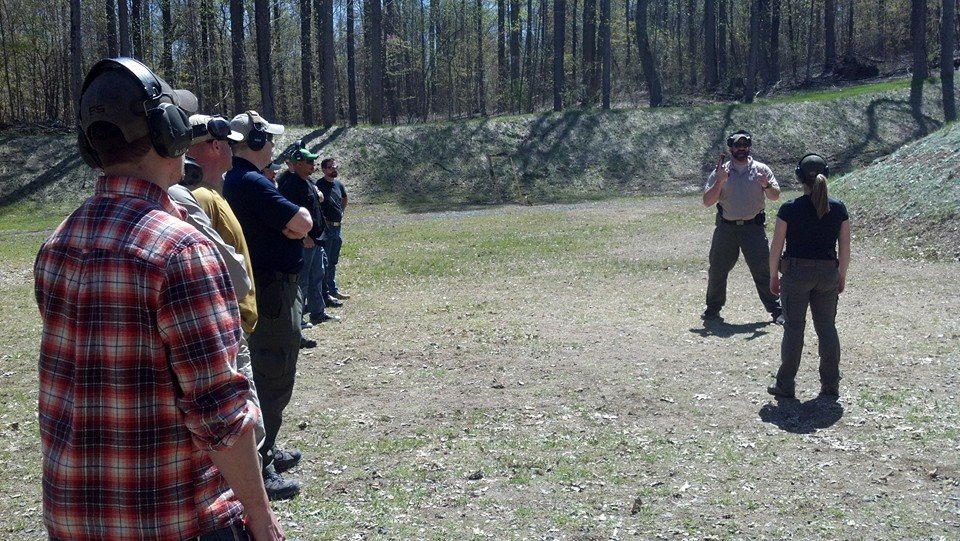 This is an After Action Review on the Critical Handgun Employment class taught by Steve “Yeti” Fisher of Sentinel Concepts (http://sentinelconcepts.com). This was a Sunday-Monday class that I took about 14 months ago (as of this writing). The class was held at the Tango Down Range in Hedgesville, WV. I am not affiliated with Sentinel Concepts in any way, except as a paying customer. The cost of the class was $450, plus a $50 range fee payable at the time of the class.

At the time I took this class, I was still relatively new to shooting, or at least taking classes. I had begun my training journey about a year before by taking a few firearms classes with some local outfits, but really wanted to take an entry level handgun course with someone of some solid, nationwide reputation as a prerequisite for other classes I might want to take with other trainers in the future. I was in the process of choosing Magpul when I was informed that Steve Fisher was leaving the company to start his own venture, Sentinel Concepts. I originally signed up for his Essential Handgun I class on a Friday-Saturday. However, a few weeks before the class I received word that the class had to be cancelled. I was mightily disappointed, but the next time I contacted Steve he told me I could join his Critical Handgun Employment class (the Sunday-Monday of the same weekend), which he planned to run as a combo of “Essential” and “Critical” class due to the cancellation of the other class.

I was a little nervous when I arrived at the range around 8:10 on Sunday morning:  nervous because I didn’t want to hold the class back. The class had about 15 students (a few came and went over the 2 days) and almost all of them knew Steve from prior classes with him through Magpul the year before. Four of the students were actually product development people from Beretta. The class included 4 women. No one was dressed in tacticool garb, mostly just jeans and such with a smattering of 5.11, Vertx, and Arc’teyrx stuff (I wore Cabelas trailhiker pants and a Wrangler shirt from Wal-Mart, with a 5.11 belt, Blade Tech AIWB holster, and a Blade Tech double mag pouch.) The Beretta people each had his or her own Beretta (various, including a 92SF compact Inox, a PX4, a Ninety Two or 92A1, and a special single action 92), and then there were several 1911s, at least one M&P, and then a bunch of Glocks, including several custom ones. Steve was liberal about lending stuff/guns out to the students, either for people to sample different sights, grips, etc., or in some cases to replace guns that became dysfunctional over the course of the two days. Steve mostly shot his custom Nighthawk 1911 in 9mm and with RMR on top. Very nice. Not my cup of tea, but I could appreciate it. I brought my Glock 19 and my Glock 26, both of which are mostly stock except for Glock 17 smooth faced triggers, Vickers slide lock/releases, and night sights.

Fisher is a guy who seems to base his teaching not on the latest fad, but on fundamentals that work. In short, that means front sight, front sight, front sight, and trigger control. He freely admitted all of about three hours into day one that we now had everything we needed to succeed (the sarcastic part of me wondered why I was to spend two days there?!). Day one actually started not at some nice cozy distance, but shooting at an 8 inch circle at 25 yards. Coming a month after a class where we never shot out past about 10 yards, and not having shot a handgun at all since a carbine class I took 3 weeks earlier, I was nervous. My shots sucked. Thankfully for me, almost everyone seemed disappointed with their performances as well!

Fisher believes in shooting 25 yards cold every time he goes to the range and for all of the classes he teaches. Why? We all look like marksmen at 7 yards. Shorter distances can mask real issues that people are having. Also, if we could be successful at 25 yards, the up close stuff is easy. He also pointed out many times that there are numerous places where we may be forced to take that 25 yard shot (a grocery store aisle, for example), and in real life we don’t get practice shots, warm up time, etc. It made a lot of sense. We would visit the 25 yard line a lot over the 2 days.

Day one was all about the fundamentals and giving us the tools we needed to self-diagnose. My biggest issues were mashing the trigger, holding the gun in a death grip, and not trusting the sights and peeking at the target. I wanted to blame my sights, but when Steve took my gun and dumped a mag from 10 yards into a two-inch circle, that thought was off the table (he did the same with other people as well). At one point he stood facing me, put his finger on top of my trigger finger, and told me to hold the sights on target. He helped me press the trigger, and the shots were dead center. He did this not as a trick, but to show me how I need to press that trigger. I was impressed.

We did drills where we partnered up and fiddled with our partner’s gun (basically, round in chamber or not) so we could check for anticipatory flinches. I snatched a few but did okay overall with that exercise. We also spent some time on the various types of reloads one might perform.

The most fun I had on day one was probably the malfunction drill. After explaining his simple way of dealing with different malfunctions, he had us load our magazines with a mix of real rounds and spent casings, which was a lot more of a realistic training tool than deliberately setting up each type of malfunction and then practicing it. I got an assortment of stovepipes and doublefeeds during this drill, but it was great because there was no way to predict which one you would get.

The day ended with us each taking a turn talking about our takeaways from the day. There were, in fact, several of these reflective opportunities each day, not just at the end. We finished around 6:30 PM.

Day two started at 8:30 am and we started again at 25 yards. On the recommendation of a fellow student, I decided to shoot my Glock 26 on day two. She was one of the best shooters in the class and said I should shoot what I carry the most. We all again sucked at 25, which left Steve shaking his head. I did improve from the day before and told him I had switched guns. He remarked that a lot of people shoot the G26 better than its larger cousins, especially in the Gen 3 versions.

We went from that straight into his standards. That same 8 inch circle. 40 rounds, 10 each from 25, 15, 10, and 5 yards, all on the timer. The timing was generous, though. Here I shined, and this would be the theme for the rest of the day for me (when moving or on the clock, I shot better). I landed two shots just outside the circle at 25; all the rest were in the black. The only photo I took was of that circle!

We spent the rest of the day on failure drills, multiple adversaries, some situational awareness stuff, and some shooting while moving. Every now and then we would revisit the 25 yard mark, and also shot the standards a few more times. Near the end, we started to put it all together. Moving and shooting with reloading, moving and shooting with those dreaded shell casings in our magazines, etc. Just as the rain started to fall, we shot the standards again, had our roundtable takeaways discussion, and called it quits around 5 pm.

What I liked about Fisher was that he didn’t claim ownership of anything. He borrows from here and there and applies logic. For example, he admits that the moving while shooting and fixing malfunctions isn’t realistic. Who would continue to advance on someone while fixing a doublefeed? Rather, such drills are designed to show how to deal with multiple issues at a time. Likewise, he doesn’t get caught up in dogma on tactical reloads and such. He showed us several ways to skin a cat. He gave us his own list of other trainers who are excellent (no surprises on who he recommended), but he pointed out that there is always local talent in any area and to seek it out. The final thing I should mention is that, though billed as a level II class, and despite the fact that he had a bunch of former students in this class, he met us where we were, back to basics. No “we must cover the curriculum” stuff; if we weren’t ready, we weren’t ready.

I would definitely recommend Steve Fisher and his company, Sentinel Concepts. When I took this class, he offered classes in handgun, carbine, and shotgun, but has since added low-light, vehicle, and shoot-house/home defense classes while expanding the handgun, carbine, and shotgun offerings. Looking back on the class, I feel like I didn’t appreciate everything at the time. But now, I can say that he definitely made me a better shooter. I continue to utilize his shooting from 25 yards cold each time I go to the range. I also try to remember all of his teaching on trigger control and the front sight. I also switched my G19 to have a black rear and narrower front sight blade. Finally, I did get a second G19 with an RMR. I guess the best endorsement I can give is that I would definitely take a class–or three–with him again.